Portrait of a Con Artist 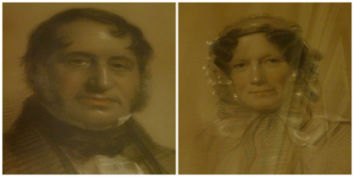 The pair of portraits, hanging either side of the fireplace in the drawing room are of particular interest to visitors.  My great-great-great uncle Issacc and his wife Hannah.  It’s in the subtlety of their expressions, which can change slightly in different light, or with the weather.  He has a look of smug self-assurance, a confidence in his eyes that comes with the burden of being in charge.  I can imagine it being the expression he wore as he made the fateful decision 163 years ago, to lead the 50 men in his charge into the ambush awaiting them in the Bestaan Uit valley, in the dying days of the first Boer war.   He survived, along with his communications officer, but 48 men died that morning, their bodies only recovered when the Boers surrendered six weeks later.  He received a purple cross for his bravery, but was given the nick-name “The Boer Runner”, the label of cowardice which stuck with him for the rest of his life.

Opinion is fairly evenly divided about Hannah’s likeness.  Some see a kind, caring face.  Others, the face of a bitter woman.  Knowing her story, I would have to side with the latter opinion.  She was only 18 when they married, he a 32 year old widower who would, very shortly after their joining, bring everlasting shame on the family name.  And so, Hannah, “the

Runner’s Wife”, stares out from her picture frame, smirking at the cruelty of being immortalized beside the coward who defined her.

Actually, none of this is true.  I have no idea who these people are, but that wouldn’t have made a very interesting story now, would it?